NASA and the Heart of Engineering

Heart surgery. While attending this week’s Atlantic Design and Manufacturing event keynote presentation by renowned astronaut and engineer Dr. Leroy Chiao, I could not get heart surgery out of my head.

Chiao at no point mentioned heart surgery. While he did note medical engineering, its mention was brief and not the focus of his talk, which outlined his extensive time at NASA, complete with breathtaking photos he captured from the six months he spent living, researching, and working on the International Space Station (ISS).

Chiao is a stellar engineer and as exceptionally skilled at as he is excited by his career. He’s a man who graduated in 1983 with his engineering degree before going on to get a PhD, and, based on conversations I had with him before New York’s Design and Manufacturing and at the show itself, continues to be enthusiastic about engineering and all its possibilities for the future. 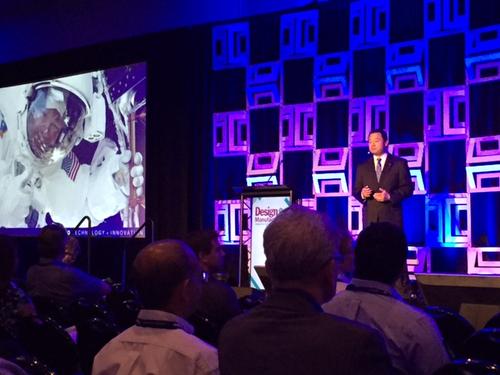 Yet not-mentioned “heart surgery” was top of my mind during his presentation. Specifically, heart transplant surgery and ventricular assist devices (VAD), electromechanical circulatory-assistance devices that function as a bridge to heart transplant by pumping blood until a donor heart is available.

VADs were developed, in part, through work by NASA. The lifesaving devices are among a long list of technologies that related to NASA work. And, to be sure, medical is hardly alone as the only vertical to benefit from NASA engineering. In fact, between consumer, public safety, transportation, and other verticals, it’s likely that you often interact with devices influenced by NASA innovation without even thinking about it.

Here’s the thing: We need to think about it. We need to recognize the tremendous impact NASA has had from both technology and inspirational standpoints. We’re currently running on a generation of engineers born into the Space Race and motivated by that excellence and achievements.

When I spoke with Chiao ahead of his trip to New York for this Design News interview , he made note that post Space Shuttle and ISS, NASA hasn’t had a real future plan for progressing. Yes, we all cheered along with NASA’s engineers when Curiosity landed safely on Mars, but as Chiao notes there’s no long-term, measurable plan for Mars projects as there have been for previous NASA projects.

It’s unfortunate but at the end of the day most decisions with NASA, as with any government-associated group, become matters of politics and funding. It’s no secret that funding cuts have come to NASA over the decades. And once the country mourned the crew of the Space Shuttle Columbia in 2003, any politician who pushed for advancing the US space program risked being villainized as reckless with not only lives but that incomplete funding.

Now you can earn IEEE Professional Development Hours by attending CEC courses.
More Info »
Next Class: Coming Soon
Coming Soon
Please bear with us as we put together a new semester of classes for you.
Presented By:
Digi-Key Electronics
END_OF_DOCUMENT_TOKEN_TO_BE_REPLACED

Your direct link to advanced design and manufacturing products and suppliers
Search for products & manufacturers:
Next Class: Coming Soon
END_OF_DOCUMENT_TOKEN_TO_BE_REPLACED

Please wait a moment while we find a poll.
END_OF_DOCUMENT_TOKEN_TO_BE_REPLACED