Researchers in India have devised a way to use fish scales to develop a piezoelectric-based energy harvester that could potentially power medical and other small electronic devices.

”It is well known that fish scale is composed of collagen fibers those have piezoelectric property,” he said. “Thus, we used a trick where we have directly used fish scale to fabricate a piezoelectric nanogenerator for a mechanical energy harvester.”

To do this, the team collected the biowaste of hard, raw fish scales from the fish-processing market, which make the harvester transparent, then used a demineralization process to make it flexible, Mandal said. “The collagen layers serve as active piezoelectric element in the [fish scales],” he said. “Then we developed a bio-piezoelectric nanogenerator, or energy harvester, by making electrodes on both sides followed by lamination.” 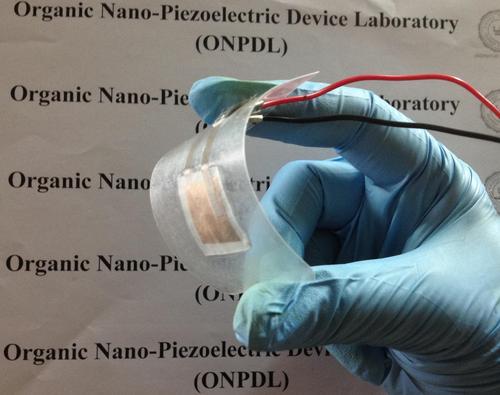 The piezoelectric-based energy harvester uses the collagen inside fish scales to generate energy.

Fish is widely consumed in India, and the disposal of the waste from this consumption -- which is messy and also costs a considerable amount of money -- was a natural inspiration for a way to reuse the material for something else, Mandal said. “If we are able to recycle them then it will be a potential approach that can reduce the waste-management cost, as well lead to a value-added product,” he said.

Mandal and Ghosh published an article about their work in the journal, Applied Physics Letters.

The energy harvester developed by Mandal and Ghosh is particularly well-suited to medical devices that can be implanted into the human body not only because they often require only tiny batteries that don’t need a lot of energy, but also because of the natural ingredient it relies on to deliver energy, Mandal said.

“It should be noted that collagen is available in human skin, tendons, ligaments, cartilage, bones, blood vessels, teeth, and muscle tissue,” he said. “Therefore it is expected that a fish-scale-made device might be compatible with human body parts.” In contrast, most traditional available piezoelectric materials consist of toxic materials and need multiple processing steps to fabricate the device, Mandal added.

Other piezoelectric energy harvesters also tend to be brittle and inflexible, which also can limit their use for applications such as healthcare monitoring, self-powered implantable bio-medical devices, and targeted drug delivery inside the human body.

One particular application researchers are eyeing for the harvester is to implant it in a pacemaker, where it will continuously generate power using the human heartbeat without need for recharging or the surgery required to replace a pacemaker battery when it wears out. “Since heart tissue is also composed of collagen, it is expected that [the energy harvester] will be friendly

Now you can earn IEEE Professional Development Hours by attending CEC courses.
More Info »
Next Class: Coming Soon
Coming Soon
Please bear with us as we put together a new semester of classes for you.
Presented By:
Digi-Key Electronics
END_OF_DOCUMENT_TOKEN_TO_BE_REPLACED

Your direct link to advanced design and manufacturing products and suppliers
Search for products & manufacturers:
Next Class: Coming Soon
END_OF_DOCUMENT_TOKEN_TO_BE_REPLACED

Please wait a moment while we find a poll.
END_OF_DOCUMENT_TOKEN_TO_BE_REPLACED