Keep Calm and Go to Pluto

Imagine this: You’ve worked for 14 years toward a project goal. You’ve crossed every T. Dotted every I. Ensured every aspect of your design, your team was set to work optimally. Your project launches. Then something goes wrong and it’s out of your control. Now imagine the whole world was watching.

Dramatic, yes, but that’s round about what happened with New Horizons on July 4, 2015, just days before its scheduled nine-day fly-by sequence of Pluto was to start.

Leading our journey to Pluto was Alice Bowman, New Horizons Mission Operations Manager (MOM), Johns Hopkins. In short, we lost contact with the spacecraft, something Bowman and her team call the “July 4 anomaly.”

Had a lesser team been watching over New Horizons -- the interplanetary space probe that launched as a part of NASA's New Frontiers program and was engineered by the Johns Hopkins University Applied Physics Laboratory and the Southwest Research Institute -- the historic effort may have not had the same results. 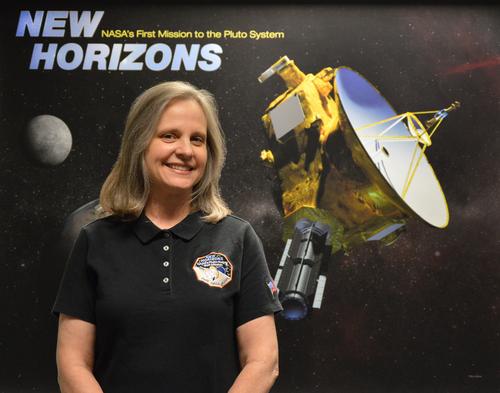 Says Bowman of the team:

“It was a once and lifetime opportunity to fly by Pluto and none of us were willing to give that up without a fight.”

Bowman will share more of her thoughts on New Horizons and the first flight past the distant dwarf planet at the Embedded Systems Conference (ESC) Silicon Valley this December, where she is set to keynote. Ahead of her ESC keynote , Bowman shares perspective on planning for the unexpected, Pluto, and our next steps in space exploration in the following interview.

How did you go from being a girl who watched Star Trek and Lost in Space to a physics and chemistry major in college to your role as APL MOM?

Lots of hard work. I guess it was holding on to that excitement as a kid of watching those shows and watching the Apollo astronauts take off from Earth. It was that excitement that got me through the hard work as I looked toward an exciting career. [Space exploration] initially captured my interest in science, but once I got to college, I found there were many more things I was excited about learning. I switched my major to physics and chemistry so I could get more broad exposure to all those other fields, as well.

What are your thoughts on staying calm when you are out of control, as can become the norm in deep-space exploration?

A lot of it is experience. We’ve encountered many, how can I say this, ‘exciting’ parts of our jobs and we have tried-and-true process that we go through. I think everyone on the team has their own personal process that they go through to maintain that calm and that focus in those periods of unexpectedness.

Reaching for New Horizons. Alice Bowman will talk about the voyage of NASA's historic mission to Pluto through the eyes of the mission operations team and describe some challenges of piloting the small robotic spacecraft through the solar system for nearly a decade -- such as planning for (and dealing with) long-distance technical hiccups. Join her at

Now you can earn IEEE Professional Development Hours by attending CEC courses.
More Info »
Next Class: Coming Soon
Coming Soon
Please bear with us as we put together a new semester of classes for you.
Presented By:
Digi-Key Electronics
END_OF_DOCUMENT_TOKEN_TO_BE_REPLACED

Your direct link to advanced design and manufacturing products and suppliers
Search for products & manufacturers:
Next Class: Coming Soon
END_OF_DOCUMENT_TOKEN_TO_BE_REPLACED

Please wait a moment while we find a poll.
END_OF_DOCUMENT_TOKEN_TO_BE_REPLACED