Harvard researchers have reached a new milestone in the development of organic flow batteries for alternative-energy storage, identifying a new class of high-performing organic molecules inspired by vitamin B2 that can safely store electricity from intermittent energy sources in large-scale batteries.

“Redox flow battery was invented back in 1970s,” Kaixiang Lin, a PhD candidate at Harvard and first author of a paper published about the recent work in the journal, Nature Energy , explained to Design News in an interview. “Early development of RFB electrolyte materials focused on conventional metal ions such as vanadium, iron, or chromium dissolved in their salt solutions.” 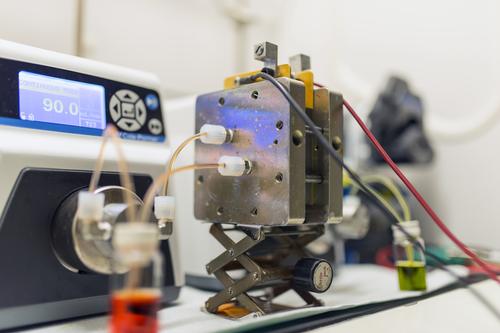 Recently, however, researchers started to use organic molecules, such as quinones, TEMPO, and viologens, to replace those metal ions to solve challenges that come with the development of RFBs, including high corrosivity, high membrane-crossover rate, and low solubility, he said. “Our lab pioneered the development of quinone-based RFB electrolyte materials,” Lin said.

That was back in 2014, when Aziz, Gordon, and Aspuru-Guzik replaced metal ions used as conventional battery electrolyte materials in acidic electrolytes with quinones, which are molecules that store energy in plants and animals. The next year, they developed a quinone that could work in alkaline solutions alongside a common food additive called ferrocyanide.

The latest in this line of research is the discovery of new organic molecules that function similar as quinones and can be used for RFBs. To this end, the team found vitamin B2, which helps to store energy from food in the body, Lin said. The key difference between B2 and quinones is that nitrogen atoms, instead of oxygen atoms, are involved in picking up and giving off electrons.

“As we dig deep into this molecule, we learned that alloxazine, which shares a very similar molecular structure with vitamin B2, performs much better under the requirement for RFB electrolyte materials, i.e. higher stability, lower reduction potential (higher battery voltage), etc.,” he said. “The discovery of alloxazine along with its ease of synthesis became the backbone of this project, which we deemed vitamin B2-inspired.”

The discovery of the alloxazine family “opens a new universe of molecules that we can synthesize to help improve battery performance” as researchers continue to work on organic options for grid-level energy storage for alternative energies like solar and wind, Lin said. The team will continue its research with

Now you can earn IEEE Professional Development Hours by attending CEC courses.
More Info »
Next Class: Coming Soon
Coming Soon
Please bear with us as we put together a new semester of classes for you.
Presented By:
Digi-Key Electronics
END_OF_DOCUMENT_TOKEN_TO_BE_REPLACED

Your direct link to advanced design and manufacturing products and suppliers
Search for products & manufacturers:
Next Class: Coming Soon
END_OF_DOCUMENT_TOKEN_TO_BE_REPLACED

Please wait a moment while we find a poll.
END_OF_DOCUMENT_TOKEN_TO_BE_REPLACED