Now that solar energy is maturing as a technology and prices are coming down, researchers are trying to find ways to make solar cells work even more efficiently at even lower costs. One of those ways is to create technology that can harvest more of the sun’s energy than current cells, which don’t use the full solar spectrum.

One of the latest research efforts is from a cross-disciplinary team from MIT and the Masdar Institute of Technology , where researchers have taken a layered-material approach to developing a solar cell that allows it to harvest energy from different parts of the solar spectrum.

The team -- which included principal investigators Ammar Nayfeh, associate professor of electrical engineering and computer science at the Masdar Institute; and Eugene Fitzgerald, a professor of materials science and engineering at MIT -- created the technology by layering a gallium arsenide phosphide-based solar cell on a low-cost silicon solar cell. Gallium arsenide phosphide is a semiconductor material that absorbs and efficiently converts higher-energy photons. 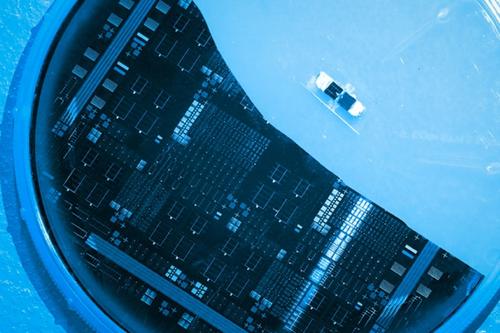 A research team from MIT and the Masdar Institute of Technology developed a silicon solar cell with a silicon-germanium filter using a step-cell design (large device) and a gallium arsenide phosphide layer on silicon step-cell proof-of-concept solar cell (small device).

While the Masdar team was mainly responsible for developing the proof-of-concept solar cell, researchers at MIT contributed the gallium arsenide phosphide to the project. The two materials could not be combined on one cell because the crystal lattices differ considerably from silicon’s and will degrade the silicon crystals if grown directly on the material, Nayfeh said. That’s why the gallium arsenide phosphide was developed on a substrate made of silicon germanium.

However, this posed an additional problem that itself inspired the step-cell concept, which paves the way for a low-cost fabrication process that can also drive the cost down of these new, more efficient cells, Nayfeh said. Silicon geranium absorbs lower-energy light waves before they reach the bottom silicon layer and does not convert them into current. To get around this problem, “we developed the idea of the step cell, which allows us to leverage the different energy-absorption bands of gallium arsenide phosphate and silicon,” he said.

The cell creates a step between the top layer and the bottom layer, exposing the silicon layer, which allows the top gallium-arsenide-phosphide layer to absorb the high-energy photons from blue, green, and yellow light. This leaves the bottom silicon layer free to absorb not only lower-energy photons -- like those from red light -- transmitted through top layers -- but also the entire visible light spectrum, said Sabina Abdul Hadi, a PhD student at Masdar Institute whose doctoral dissertation provided the foundation for the work.

Now you can earn IEEE Professional Development Hours by attending CEC courses.
More Info »
Next Class: Coming Soon
Coming Soon
Please bear with us as we put together a new semester of classes for you.
Presented By:
Digi-Key Electronics
END_OF_DOCUMENT_TOKEN_TO_BE_REPLACED

Your direct link to advanced design and manufacturing products and suppliers
Search for products & manufacturers:
Next Class: Coming Soon
END_OF_DOCUMENT_TOKEN_TO_BE_REPLACED

Please wait a moment while we find a poll.
END_OF_DOCUMENT_TOKEN_TO_BE_REPLACED