Sometimes the barrier to entry for using solar energy at home is the difficulty of installing a system with multiple parts for harvesting, generating, and storing it. Enter Austria-based SmartFlower, an all-in-one solar power system that can do all three of those things in a system that’s designed to aesthetically resemble a flower.

“Our ambition is to establish the first all-in-one solar system on the market,” she said. “We oriented ourselves after the principle ‘form follows function,’ and that brought us to the flower-blossom design of SmartFlower." The team worked with design partner GP designpartners , who realized the initial idea into a functional design, she added. 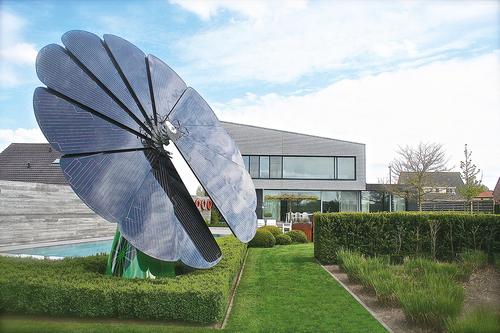 SmartFlower is an all-in-one solar system with an integrated storage unit with 2.3 kWh or 4.6 kWh capacity, depending on the model. SmartFlower “wakes up” at sunrise and uses a smart-cleaning function to automatically clean itself in preparation for capturing the sun’s rays. It then fans out its solar petals to 18 square meters (or 194 square feet) and begins harvesting and generating solar energy, Nilsson told us.

The system also includes other various so-called “smart features” that make is easy for customers to use. These include smart tracking through a bi-axial, astronomically controlled tracking system that ensures a perfect 90-degree angle to the sun all day. This increases power efficiency and enables a higher self-utilization of about 60% or more, compared to typical rooftop systems that average about 25% self-utilization, she said.

Another smart feature is the ability to cool itself using ventilated panels that prevent hot air from accumulating and inhibiting energy production. It also is easy to set up, taking only one to two hours for installation, Nilsson added.

“With SmartFlower, we enable more people to do something within renewable energy and to support a better future climate,” Nilsson said. “This makes access to your own produced energy easy and uncomplicated, and the solution is a really smart and good-looking one.”

One SmartFlower produces the equivalent of a 4-kW rooftop system, which the company said is unrivalled for a standalone solar-energy system. The energy harvested by SmartFlower can be stored with integrated batteries and synchronized with smart-home automation via mobile devices for an off-the-grid solution, the company said.

SmartFlower launched in Europe in 2014 and now has installed more than 1,000 units in 20 European countries. The company this month made its debut in the US at San Francisco’s Intersolar North America event.

Elizabeth Montalbano is a freelance writer who has written about technology and culture for more than 15 years. She has lived and worked as a professional journalist in Phoenix, San Francisco, and New York City. In her free time she enjoys surfing, traveling,

Now you can earn IEEE Professional Development Hours by attending CEC courses.
More Info »
Next Class: Coming Soon
Coming Soon
Please bear with us as we put together a new semester of classes for you.
Presented By:
Digi-Key Electronics
END_OF_DOCUMENT_TOKEN_TO_BE_REPLACED

Your direct link to advanced design and manufacturing products and suppliers
Search for products & manufacturers:
Next Class: Coming Soon
END_OF_DOCUMENT_TOKEN_TO_BE_REPLACED

Please wait a moment while we find a poll.
END_OF_DOCUMENT_TOKEN_TO_BE_REPLACED