A team of researchers from The Australian National University (ANU) has made a breakthrough in efforts to power sensors using energy harvested from signals emitted by television and cellular transmissions, such as those from mobile base stations.

The team, led by Salman Durrani from the ANU Research School of Engineering, has accurately modeled how much energy it takes to sense and transfer information by wireless sensors.

While the work is not a technological breakthrough in terms of devices that harvest energy, it does show that it’s feasible to have energy-harvesting-powered sensors with communication delays typically limited to less than a few hundred milliseconds.

“A sensor solely powered by energy harvesting from radio frequency waves must first wait for a sufficient amount of energy to be harvested before it can transmit,” Durrani explained to Design News . “This means a delay is introduced in the communication. The focus of our work is on designing wireless communication protocols that can achieve good communication delay performance with energy-harvesting-powered sensors.” 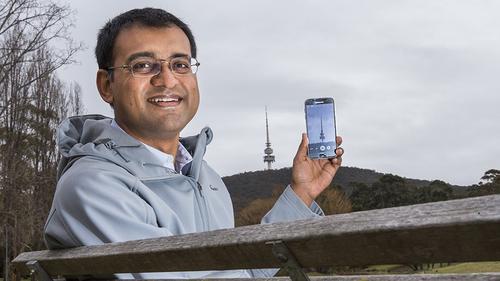 A team of researchers has accurately modeled how much energy it takes to sense and transfer information by wireless sensors, making it easier to develop energy-harvesting technology that uses wireless base stations to generate electricity.
(Source; ANU)

Researchers have been working for some time to harvest energy from signals emitted by television and cellular transmissions in the air. The idea is that this energy can be used to power wireless sensors for Internet of Things (IoT) applications, precluding the need for batteries, which can be cumbersome and require maintenance.

For instance, a team from the University of Washington’s Sensor Systems Laboratory and Delft University of Technology (TU Delft) has developed a programmable, sensor-based computing platform that harvests energy from RF waves rather than using a battery.

The work by Durrani’s team can complement this type of research by making it more efficient to use the energy harvested from RF signals. “Our focus is not on trying to harvest energy from radio frequency waves but rather smarter ways of using the harvested energy,” he said.

Indeed, energy harvesting is expected by many to be the way forward to power the myriad sensors necessary to connect devices, collect data, and perform other functions for IoT and next-generation medical applications, among others, Durrani said.

Elizabeth Montalbano is a freelance writer who has written about technology and culture for more than 15 years. She has lived and worked as a professional journalist in Phoenix, San Francisco, and New York City. In her free time she enjoys surfing, traveling, music, yoga, and cooking. She currently resides in a village on the southwest coast of Portugal.

Now you can earn IEEE Professional Development Hours by attending CEC courses.
More Info »
Next Class: Coming Soon
Coming Soon
Please bear with us as we put together a new semester of classes for you.
Presented By:
Digi-Key Electronics
END_OF_DOCUMENT_TOKEN_TO_BE_REPLACED

Your direct link to advanced design and manufacturing products and suppliers
Search for products & manufacturers:
Next Class: Coming Soon
END_OF_DOCUMENT_TOKEN_TO_BE_REPLACED

Please wait a moment while we find a poll.
END_OF_DOCUMENT_TOKEN_TO_BE_REPLACED