Researchers are increasingly seeing the value in carbon monoxide as a source of alternative fuel rather than as merely a type of pollution. We already told you how biological engineers at Cornell University have developed a way to make the biofuel ethanol through a fermentation process using carbon monoxide waste from industry. Now researchers at the University of Illinois at Chicago (UIC) have worked with solar energy to do something similar, engineering a solar cell that converts atmospheric carbon dioxide directly into usable hydrocarbon fuel.

The new device -- an “artificial leaf” of sorts engineered by Amin Salehi-Khojin, assistant professor of mechanical and industrial engineering at UIC and his team -- mimics photosynthesis in plants, making it “photosynthetic” rather than photovoltaic, which is what typical solar cells are.

“Instead of producing energy in an unsustainable one-way route from fossil fuels to greenhouse gas, we can now reverse the process and recycle atmospheric carbon into fuel using sunlight,” Salehi-Khojin said. 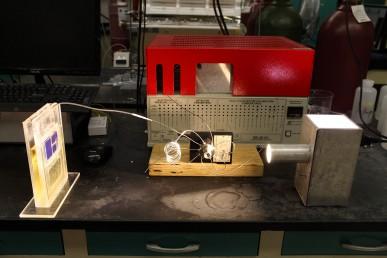 The artificial leaf is different from plants in that instead of delivering fuel in the form of sugar, it delivers syngas, or synthesis gas, which is a mixture of hydrogen gas and carbon monoxide. Syngas has several uses as a biofuel; it can be burned directly or converted into diesel or other hydrocarbon fuels, he said.

Key to the research is its reduction reaction -- or chemical reaction that converts carbon dioxide into burnable forms of carbon. Researchers have been working with different catalysts to induce these reactions, with inefficient and expensive results so far, Salehi-Khojin said.

The UIC team was more successful because it focused on a family of nano-structured compounds called transition metal dichalcogenides, or TMDCs, as catalysts, researchers said. In experiments, they paired these with an unconventional ionic liquid as the electrolyte inside a two-compartment, three-electrode electrochemical cell, finding that the best catalyst was a nanoflake tungsten diselenide, which had the strongest ability to break carbon dioxide’s chemical bonds, according to the team. Indeed, the catalyst proved 1,000 times faster than typical noble-metal catalysts, and about 20 times cheaper, researchers said.

The artificial leaf is comprised of two silicon triple-junction photovoltaic cells of 18 square centimeters to harvest light; the tungsten diselenide and ionic liquid co-catalyst system as a cathode; and cobalt oxide in potassium phosphate electrolyte as an anode. When tested using energization from light of 100 watts per square meter -- the average intensity of sunlight reaching the Earth’s surface -- the cell produced hydrogen and carbon monoxide gas from the cathode, while the anode emitted free oxygen and hydrogen ions, researchers said.

The technology should scale up for use in solar farms of artificial leaves that can remove carbon from the atmosphere while producing energy-dense fuel, Salehi-Khojin said. They also could prove useful in space exploration or even habitation on a planet

Now you can earn IEEE Professional Development Hours by attending CEC courses.
More Info »
Next Class: Coming Soon
Coming Soon
Please bear with us as we put together a new semester of classes for you.
Presented By:
Digi-Key Electronics
END_OF_DOCUMENT_TOKEN_TO_BE_REPLACED

Your direct link to advanced design and manufacturing products and suppliers
Search for products & manufacturers:
Next Class: Coming Soon
END_OF_DOCUMENT_TOKEN_TO_BE_REPLACED

Please wait a moment while we find a poll.
END_OF_DOCUMENT_TOKEN_TO_BE_REPLACED