Recent wind-energy research has set its sights on scaling up, with the development of some of the largest-ever wind turbine technology to take advantage of this type of energy on a grand scale. Meanwhile, a team of scientists from Oxford University is working on the other end of the spectrum, demonstrating how the natural movement of bacteria could be harnessed to put together and power microscopic wind farms.

A team at Oxford University has shown through computer simulations how the chaotic swarming effect of active matter such as bacteria can be harnessed and directed to turn cylindrical rotors, providing a steady power source for engines and electronics on a micro scale.

“Evolution has created some amazing biological machines,” said Tyler Shendruk from Oxford University's Department of Physics, explaining to Design News how the team was inspired to come up with the idea. “But it's difficult to directly harness this biology or to incorporate it into our own micromechanical machines.”

Shendruk and fellow researchers looked at biological fluids that spontaneously flow under their own action without being pushed on for their work, calling these “active fluids,” he said. “A good example of an active fluid is a liquid with many swimming bacteria in it,” he said. “As the bacteria swim, they drag and push each other along causing beautiful swirling flows. We call the chaotic swirling flow active turbulence.” 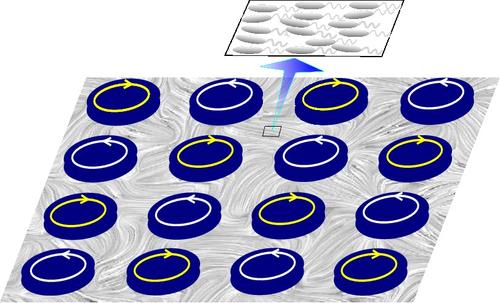 Photo of computer simulations of microscopic wind farms developed by harnessing the movement of bacteria in active fluid. The work was demonstrated by a team of scientists from Oxford University and could have applications for providing energy for microscopic engines or devices.
(Source: Oxford University)

However, although active turbulence is beautiful, it's unpredictable, which means it's difficult to find a utilitarian use for it, he explained. “If it's constantly swirling around, how can it be harnessed to do work for us?” Shendruk said.

In previous work, scientists built tiny microscopic gears shaped with teeth faced one way, which they submersed in an active fluid. The shape of the teeth meant that bacteria could only push on the gear to turn it one way but not the other.

The Oxford team didn’t want to build a mechanism quite “so fancy,” Shendruk said. Instead, they used computer simulations to model an active fluid of many swimming bacteria. They then stuck a solitary disc in active turbulence that was pinned in place but free to rotate, like a weathervane, but found the disc just spun in all directions without order, which wasn’t what they wanted to achieve at all.

Eventually, the team simulated an entire array of rotors on a grid, finding that this spurred a rotational pattern much like a microscopic wind farm, Shendruk said.

“This was a self-decided pattern, where each disc turned in the opposite direction as its neighbors and every single disc in our simulation permanently obeyed this pattern,” he said. “This self-decided emergence of a natural pattern is called self-assembly.

Now you can earn IEEE Professional Development Hours by attending CEC courses.
More Info »
Next Class: Coming Soon
Coming Soon
Please bear with us as we put together a new semester of classes for you.
Presented By:
Digi-Key Electronics
END_OF_DOCUMENT_TOKEN_TO_BE_REPLACED

Your direct link to advanced design and manufacturing products and suppliers
Search for products & manufacturers:
Next Class: Coming Soon
END_OF_DOCUMENT_TOKEN_TO_BE_REPLACED

Please wait a moment while we find a poll.
END_OF_DOCUMENT_TOKEN_TO_BE_REPLACED