Solar-energy researchers are eyeing a number of key ways to bolster the efficiency of current solar cells, one of which to harvest energy not only from sunlight but also the heat emanated from the sun.

New research in this effort is from Purdue University , where researchers have developed a concept for a hybrid system they said has the potential to reach 50% energy efficiency. The system combines two different ways to harvest energy from sunlight and another way to generate that energy into electricity, and also stores the energy for future use.

“For many years, there has been a debate about photovoltaic flat panels versus concentrating solar power, since both have certain virtues and disadvantages,” Peter Bermel, an assistant professor in Purdue University's School of Electrical and Computer Engineering, told Design News . “To us, it made sense to combine them, to benefit from the best of both worlds.” 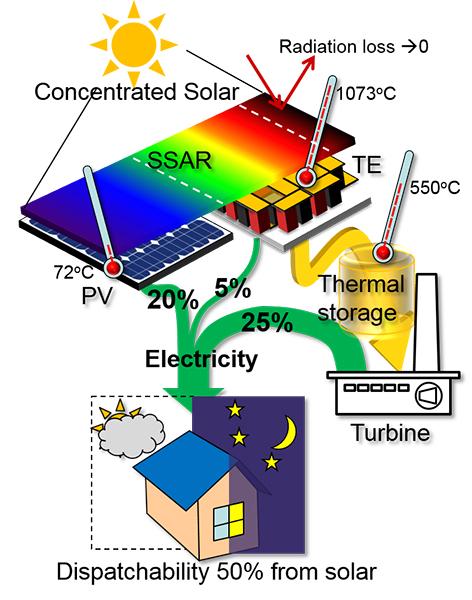 This schematic depicts a new concept from researchers at Purdue University that they said could bring highly efficient solar power by combining three types of technologies that convert different parts of the light spectrum and also store energy for use after sundown.

More specifically, the technology works by using a selective solar absorbing-reflector to split the solar spectrum into photovoltaic and thermal parts of the spectrum, and rejecting long wavelengths of sunlight to maximize the efficiency, Bermel explained.

“It then feeds each component with the corresponding parts of the spectrum,” he said. “This is much more efficient than using either option in a standalone form factor.” The thermoelectric devices and steam turbines would be driven by heat collected and stored using mirrors to focus sunlight onto the selective solar absorber and reflector.

Indeed, the selective solar absorber and reflector -- which was technically challenging for the team to develop -- is the lynchpin of this approach, Bermel said. It plays two key roles in the system -- to increase efficiency by reflecting visible light but absorbing near-infrared photons, and to increase the temperature of the stored heat, which is then harnessed as electricity when it is needed throughout the course of the day.

The team still needs a small-scale prototype system to test its hybrid energy harvester, which at this point is theoretical. Bermel said researchers are in the process of applying for grants to continue its research, which will be published in a future issue of the journal, Energy & Environmental Science .

However, Bermel maintains that the approach will be up to 50% efficient, in contrast to commercial crystalline silicon photovoltaic modules on the market today that currently have a ceiling of 24.1% efficiency. “There are also triple-junction cells on the market with higher efficiencies as well, but they are roughly 100

Now you can earn IEEE Professional Development Hours by attending CEC courses.
More Info »
Next Class: Coming Soon
Coming Soon
Please bear with us as we put together a new semester of classes for you.
Presented By:
Digi-Key Electronics
END_OF_DOCUMENT_TOKEN_TO_BE_REPLACED

Your direct link to advanced design and manufacturing products and suppliers
Search for products & manufacturers:
Next Class: Coming Soon
END_OF_DOCUMENT_TOKEN_TO_BE_REPLACED

Please wait a moment while we find a poll.
END_OF_DOCUMENT_TOKEN_TO_BE_REPLACED