Researchers have developed a plastic solar cell that replaces toxic halogen solvents with a common food additive to create a more environmentally friendly production process for manufacturing these type of cells.

A team from North Carolina State University and the Chinese Academy of Sciences have created what they say is an efficient solar cell made of semi-printed plastic without the use of environmentally hazardous halogen solvents. Instead, they use o-methylanisole (o-MA)—a commonly used food-flavoring agent that’s nontoxic to humans--as the solvent.

Plastic solar cells—or organic voltaics—have a number of benefits over their silicon counterparts, which are the ones typically manufactured and used, said Long Ye, a postdoctoral research scholar in physics at NC State and lead author of a paper published in Chemistry Materials describing the research.

“These plastic solar cells can be environmentally friendly, more colorful, and flexible with lower cost,” he told Design News in an interview. “They can also be very compatible with industrial-scale manufacturing.” The latter is in part because they can be manufactured at room temperature in an open-air environment, Ye said. 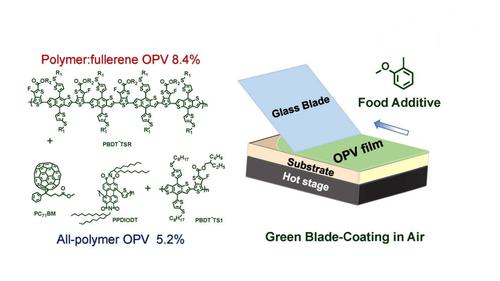 The halogen-containing solvents used in their manufacturing process have historically been an obstacle to large-scale commercialization, however. The manufacturing process uses these solvents to ensure that the solar cell’s morphology, or structure, maximizes its energy efficiency. Using harsh chemicals also requires a controlled environment, adding to production costs.

Researchers initially used a toxic solvent in their development of the cell before deciding to use o-MA to make their production safer and more environmentally friendly, Ye said. “We had to protect our health and environment, and so we came up the idea of using a single food additive as solvent,” he said.

The team used soft X-ray techniques to study the morphology of their solar cell and discovered that the o-MA-based solar cell had similar morphology, crystalline features, and device performance to those produced by halogenated solvents, Ye said. It also is widely available, non-toxic and has “excellent” solubility for common plastic solar-cell materials, he said.

Another advantage to using o-MA is that the team could produce the cell using blade coating at ambient, or room temperature. Blade coating is a process that uses a glass blade to spread a thin layer of the photovoltaic film onto either a rigid or flexible substrate, and the process is compatible with large-scale commercial manufacturing, Ye said.

In tests, the cell performed slightly lower than that of commonly used solar cells, at about 8.4 percent efficiency, Ye said. The team plans to continue to develop plastic solar cells using more efficient materials to reach a goal of more than 10

Now you can earn IEEE Professional Development Hours by attending CEC courses.
More Info »
Next Class: Coming Soon
Coming Soon
Please bear with us as we put together a new semester of classes for you.
Presented By:
Digi-Key Electronics
END_OF_DOCUMENT_TOKEN_TO_BE_REPLACED

Your direct link to advanced design and manufacturing products and suppliers
Search for products & manufacturers:
Next Class: Coming Soon
END_OF_DOCUMENT_TOKEN_TO_BE_REPLACED

Please wait a moment while we find a poll.
END_OF_DOCUMENT_TOKEN_TO_BE_REPLACED