Researchers are eyeing different methods for the storage of solar energy for use at night and when sunshine is less plentiful. We told you recently how a team at Eindhoven University of Technology is using a combination of food waste and carbon nanotubes as the basis of an alternative-energy storage system. The Department of Energy (DoE) also is working on the problem, having recently developed a new thermal-energy storage system that researchers said can perform 20 times better than similar systems.

A team at the DoE’s Argonne National Laboratory is building a pilot-scale prototype of a high-efficiency latent heat thermal energy storage system thanks to funding from the DoE’s SunShot Initiative. SunShot funds projects designed to accelerate the market competitiveness of solar power; it also provided support for a recent DoE effort to accelerate the development of modules and materials to drive down the cost of solar energy. 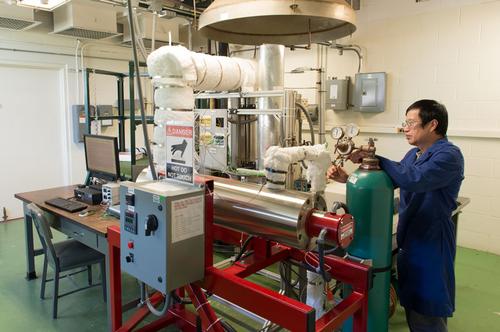 Argonne’s thermal energy storage system depends on what’s called a “phase-change” material, which melts as it stores thermal energy and then releases energy when it refreezes. This process is similar to how a battery charges and discharges.

The problem with creating phase-change-based storage systems historically has been that while the materials that can be used as phase-change materials -- ie, salts like rock salt, or sodium chloride -- are inexpensive, they are limited in ability to perform well because they lack good thermal conductivity.

Researchers at Argonne solved this problem by integrating the salts with a high-conductivity graphite foam to improve their conductivity dramatically, said Dileep Singh, leader of Argonne’s Thermal-Mechanical Technologies group.

Another benefit of combining the two also reduces the overall amount of material that the system needs -- thus reducing its cost -- while providing up to eight to 12 hours of energy storage by making the thermal energy transfer significantly more efficient, researchers said. This is a typical night of storage for solar energy in a solar power plant.

How the materials work together is that the porous graphite foam traps the salts in pores, which allows for rapid melting and freezing, according to researchers. They already have demonstrated that this rapid phase change is sustainable over time by building and testing a prototype of the system that’s the size of a blender. They are now working to scale up this prototype size by 50 times in a modular, full-scale power-plant system, said Argonne mechanical engineer Wenhua Yu.

Now you can earn IEEE Professional Development Hours by attending CEC courses.
More Info »
Next Class: Coming Soon
Coming Soon
Please bear with us as we put together a new semester of classes for you.
Presented By:
Digi-Key Electronics
END_OF_DOCUMENT_TOKEN_TO_BE_REPLACED

Your direct link to advanced design and manufacturing products and suppliers
Search for products & manufacturers:
Next Class: Coming Soon
END_OF_DOCUMENT_TOKEN_TO_BE_REPLACED

Please wait a moment while we find a poll.
END_OF_DOCUMENT_TOKEN_TO_BE_REPLACED