A fabric designer and chemical engineer have teamed up to design fabric woven with solar panels for the future of wearable, autonomously powered technology.

“The idea of building solar cells on fabric is potentially transformative,” Andrew said. “If we take this technology to grow devices on material, then we could talk wearable technology, as well as solar curtains, solar umbrellas, solar tents, or applications for the military.”

Andrew’s expertise is in chemistry, materials science, and electrical engineering, and she has been developing low-cost, lightweight solar cells as part of her research. A recent innovation she developed is an organic, dye-based solar cell deposited onto paper. 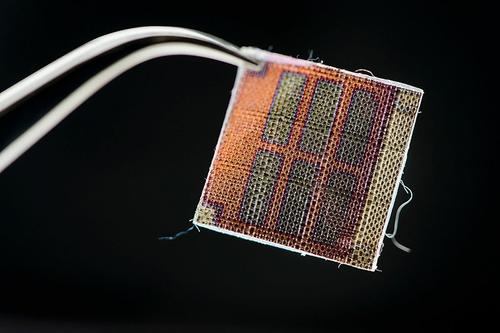 A designer and a chemist teamed up to develop fabric interwoven with solar panels that can power textiles and other wearable technology.

Fairbanks has more of an art and design background. Before joining UW-Madison, she had a company called Noon Solar that sold solar-charged handbags to the high-end, urban-based fashion market in as many as 30 stores in the US and Canada.

The two put their heads together to coat different weave types and structures with a polymer that increases the fabric’s conductivity tenfold, they said. Once fully coated, the fabric will serve as the bottom electrode, forming a base on which to build the rest of the solar cell by depositing two different dyes and a top electrode on the foundation, with the contact between the four deposits making up a complete and functional cell.

Fairbanks’ fabric design expertise came into play with the suggestion that the team create a spool of thread for each of the four components of the cell. The idea is that if those threads could be woven together, the weave’s cross-sections would also create the contact points necessary for the device to be fully functional.

Integrating solar panels and other energy-harvesters into fabric to find an alternative to batteries for electronically enabled textiles and wearable technology is not a new concept. Researchers at the Georgia Institute of Technology have developed fabric that can simultaneously harvest energy from both sunshine and motion, and the fabric also includes a small solar panel.

However, Fairbanks and Andrew said their approach is different because of their collaboration, which brings together the technologies from both the design side and the engineering side in the lab using viable manufacturing processes. This overcomes the manufacturing challenges that Andrew said is slowing the rollout of inexpensive, consumer-friendly solar cells.

“There’s no one out there, there’s no designer working with a device person trying to do this -- that’s us -- and that’s what really excites me about this project even today,” she said.

Now you can earn IEEE Professional Development Hours by attending CEC courses.
More Info »
Next Class: Coming Soon
Coming Soon
Please bear with us as we put together a new semester of classes for you.
Presented By:
Digi-Key Electronics
END_OF_DOCUMENT_TOKEN_TO_BE_REPLACED

Your direct link to advanced design and manufacturing products and suppliers
Search for products & manufacturers:
Next Class: Coming Soon
END_OF_DOCUMENT_TOKEN_TO_BE_REPLACED

Please wait a moment while we find a poll.
END_OF_DOCUMENT_TOKEN_TO_BE_REPLACED