Begonia Holds Key to Improving How Energy From Light Is Harvested

Researchers at the UK universities of Bristol and Essex have made a breakthrough in photonics, or the generation and transmission of light, by studying the color of the leaves of a common houseplant -- the iridescent begonia.

A team of researchers led by Professor Heather Whitney at the University of Bristol have discovered that chloroplasts of these types of begonias have evolved using a nanoscale light-trapping structure to help them survive in the darkness of the forest floor. Their finding can be used to create improvements in how light energy is harvested for electronics or solar power, among other applications.

The plants studied by Whitney’s team use nanotechnology to create structures in their leaves that improve how they harvest light for photosynthesis, a plant’s natural process for using sunlight to create its own nourishment.

“This begonia iridescence is rather novel because it combines the light harvesting -- the photosynthesis machinery -- and the photonics in the same material,” Whitney, from the university’s School of Biological Sciences, told Design News . “This gives the material unique interactions between the light harvesting and photonics that we might be able to use as inspiration.” 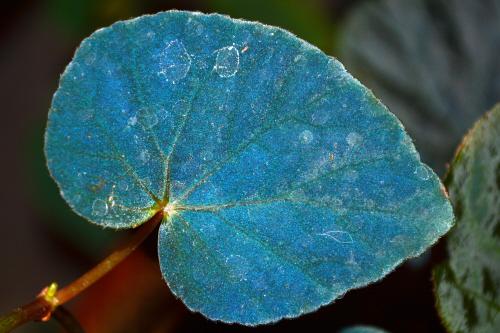 Researchers at the Universities of Bristol and Essex have made a breakthrough in photonics, or harvesting energy from light, by studying the color of the leaves of an iridescent begonia, a common houseplant.

Begonias are often popular houseplants because they can survive indoors without direct sunlight. This is directly related to how they often grow at the bottom of tropical forests where only a fraction of available sunlight reaches the ground. This has allowed begonias to evolve by harvesting as much light as possible from this limited supply, according to researchers.

Whitney said it’s this characteristic of the begonias the team studied that made their iridescence “completely counterintuitive.”

“I had previously worked on iridescence in flowers, and found that there was a good reason for flowers to produce iridescence -- it enhances how detectable the flowers are, and so makes it easier, and faster, for bees to find them,” she said. “However … why would deep-shade plants reflect blue light when this is photosynthetically useful? Since this iridescence has evolved multiple times in a wide diversity of different plant species, it suggested there was some advantage to it -- and we wanted to know what that was.”

Designers & Innovators. Learn more about some of the latest designers and innovators and what they're up to at ESC Silicon Valley , Dec. 6-8, 2016 in San Jose, Calif. Register here for the event, hosted by Design News ’ parent company, UBM.

What the team found was that the leaves of the begonia only developed a blue sheen when put in almost dark conditions; in bright light the sheen slowly disappeared. Under further examination under a microscope, it was discovered that individual chloroplasts -- also called iridoplasts -- in these leaves reflected blue light brightly, and that there’s a notable difference between the blue chloroplasts found in the begonias, and those found in other plants.

Whitney and her team

Now you can earn IEEE Professional Development Hours by attending CEC courses.
More Info »
Next Class: Coming Soon
Coming Soon
Please bear with us as we put together a new semester of classes for you.
Presented By:
Digi-Key Electronics
END_OF_DOCUMENT_TOKEN_TO_BE_REPLACED

Your direct link to advanced design and manufacturing products and suppliers
Search for products & manufacturers:
Next Class: Coming Soon
END_OF_DOCUMENT_TOKEN_TO_BE_REPLACED

Please wait a moment while we find a poll.
END_OF_DOCUMENT_TOKEN_TO_BE_REPLACED