Momentum is growing behind a technology that promises to combine the qualities of lighter-than-air airships with traditional fixed-wing aircraft.

The Airlander 10, as it’s known, is bigger than the famed Goodyear Blimp, cruises at almost 90 mph, and can carry a payload of more than 11 tons. “Lots of people have dreamed of mixing an airship with a fixed-wing aircraft,” Chris Daniels, head of communications for Hybrid Air Vehicles , which makes the Airlander 10, told Design News . “They dreamed of it because lighter-than-air flight is very efficient. But heavier-than-air flight is more controllable, faster, and better in harsh weather conditions.”

The helium-filled Airlander 10 has reportedly been able to combine those qualities because it is heavier than air and employs a more aerodynamic shape than conventional blimps. “To get all those characteristics, you need materials that are strong and light enough, so you can create a new shape,” Daniels told us. 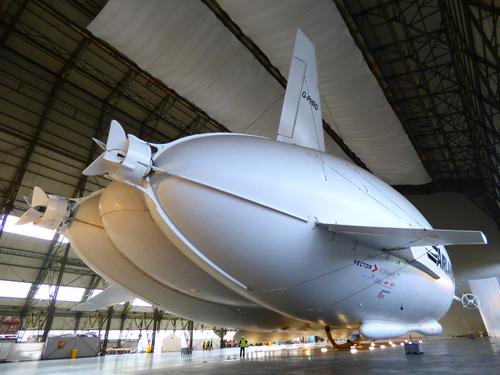 Airlander 10 combines the features of so-called “airships,” such as blimps, with the controllability of fixed-wing aircraft.

Hybrid Air Vehicles’ engineers say the structure couldn’t have been built a few decades ago. First, they say, the woven blend of materials would have been unavailable, making it impossible to create the vehicle’s shape. Second, engineers didn’t have access to computational fluid dynamics techniques, which make it possible to design the Airlander 10 without having to build numerous scale models and test them in wind tunnels.

”We got the early models more or less right, then merely refined them in the wind tunnels and refined them again in scale models,” Daniels said.

The resulting aircraft, powered by four 325-HP turbocharged diesel engines, contains two big fins, each about the “size of a tennis court,” which serve as control surfaces. Pneumatic tubes, or “skids,” enable it to land on the ground like a pontoon-equipped water aircraft. It currently requires a ground crew of four people to help with landings, but the company ultimately envisions it landing with no ground crew members at all. In comparison, a conventional blimp requires a ground crew of about 15 to 20 to moor it.

Airlander made its first flight on Aug. 17, 2016. BBC News subsequently reported that the vehicle was damaged after nosediving on its second flight on Aug. 24.

Hybrid Air Vehicles has been awarded UK and European grant funding to support development of the aircraft. The company has also carried out

Now you can earn IEEE Professional Development Hours by attending CEC courses.
More Info »
Next Class: Coming Soon
Coming Soon
Please bear with us as we put together a new semester of classes for you.
Presented By:
Digi-Key Electronics
END_OF_DOCUMENT_TOKEN_TO_BE_REPLACED

Your direct link to advanced design and manufacturing products and suppliers
Search for products & manufacturers:
Next Class: Coming Soon
END_OF_DOCUMENT_TOKEN_TO_BE_REPLACED

Please wait a moment while we find a poll.
END_OF_DOCUMENT_TOKEN_TO_BE_REPLACED