In his recent victory at the US Masters tournament, golfer Danny Willett unknowingly received an assist from an unexpected source –- The Boeing Co.’s computational fluid dynamics (CFD) software.

CFD software, more commonly used on airplanes and automobiles, improved the aerodynamics of Willett’s driver, giving it greater club head speed and stability. “With CFD, we can analyze the drag associated with the club’s crown, face, sole, or hosel,” said Evan Gibbs, research and development manager of woods at Callaway Golf, which makes the new driver. “And we can see how much it impacts the club head speed.”

The resulting club, Callaway’s XR 16 Pro Driver , is said to offer a boost of about 1 mph to 2 mph. It’s being employed, not only by Willett, but golfer Lydia Ko, who used it to win the Ladies Pro Golf Association’s (LPGA) ANA Inspiration Tournament April 3.

See the XR 16 Pro in action by clicking on the image below. 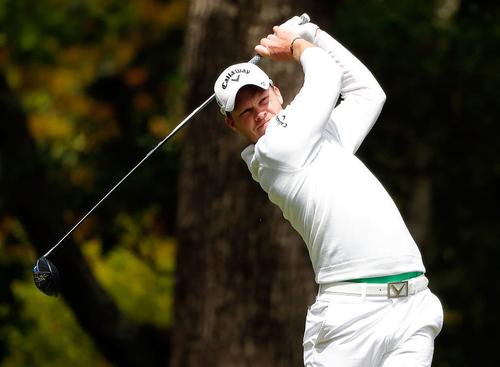 The team effort between Boeing and Callaway was years in the making. Callaway’s engineers worked with the giant aircraft manufacturer on composite clubs a decade ago, during Boeing’s 787 design. Recently, they returned for the aerodynamics collaboration. “We’d been looking at aerodynamics for many years, and we wanted to take it to the next level,” Gibbs told Design News . “To do that, we knew we needed to improve our understanding of aerodynamics, so we brought in Boeing.”

The aerodynamic challenge, common to the design of all drivers, is to reduce the drag that’s created whenever a golfer swings the short, stout head of a wood at high velocities. Specifically, the issue is pressure drag. Pressure drag is created whenever air flows across the face of the club and strikes the crown. Once that happens, the flow separates from the club head, creating a turbulent wake on the trailing side that sucks the club head backward, slowing its forward motion. That phenomenon is common, engineers say, because a wood is a so-called “bluff body” –- a flat surface in front of a short, rounded shape.

Boeing’s in-house CFD software enabled Callaway and Boeing to create a so-called “trip step” (a small step shape near the crown) in the front of the club head, prior to the point where the flow separates. “What we were trying to do is delay the separation,” Gibbs said. “We wanted to keep the flow attached to the club head longer, which minimizes the wake.” By doing so, he said, they could reduce the pressure drag behind the club.

To test whether the trip step worked, the engineering team used a robot to swing the club. By employing clubs of identical length and weight on the robot and then measuring swing velocity, they were able to determine that club head speed increased by 1 mph to 2

Now you can earn IEEE Professional Development Hours by attending CEC courses.
More Info »
Next Class: Coming Soon
Coming Soon
Please bear with us as we put together a new semester of classes for you.
Presented By:
Digi-Key Electronics
END_OF_DOCUMENT_TOKEN_TO_BE_REPLACED

Your direct link to advanced design and manufacturing products and suppliers
Search for products & manufacturers:
Next Class: Coming Soon
END_OF_DOCUMENT_TOKEN_TO_BE_REPLACED

Please wait a moment while we find a poll.
END_OF_DOCUMENT_TOKEN_TO_BE_REPLACED