12 Technologies From the Future of Manufacturing

This year, the Chicago-based show, as it has for more than a decade, also featured an Emerging Technology Center that provided a glimpse of the future directions of manufacturing. Here, we offer a peek at some of those non-traditional technologies, as well as a look at some of the new twists on tried-and-true manufacturing machinery.

Click on the image below to see some of IMTS' greatest exhibits. 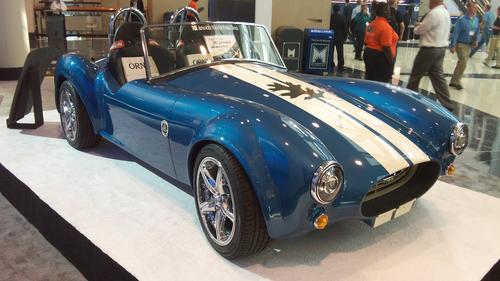 What was a Shelby Cobra sports car doing at IMTS? Incredibly, it was there because its racy-looking body was 3D-printed. Engineers from the Department of Energy’s Oak Ridge National Laboratory printed the all-electric car using 20% carbon fiber-reinforced ABS on a Big Area Additive Manufacturing machine. Designers referred to it as a “laboratory on wheels” because its plug-and-play components -- motors, battery, and fuel cells -- can be easily dropped in and swapped out.

Now you can earn IEEE Professional Development Hours by attending CEC courses.
More Info »
Next Class: Coming Soon
Coming Soon
Please bear with us as we put together a new semester of classes for you.
Presented By:
Digi-Key Electronics
END_OF_DOCUMENT_TOKEN_TO_BE_REPLACED

Your direct link to advanced design and manufacturing products and suppliers
Search for products & manufacturers:
Next Class: Coming Soon
END_OF_DOCUMENT_TOKEN_TO_BE_REPLACED

Please wait a moment while we find a poll.
END_OF_DOCUMENT_TOKEN_TO_BE_REPLACED